Game ideas are submitted via a 2-minute video to be considered for recognition. A panel of game and climate experts use the scoring rubric below will determine top selections by age categories (K-8, High School, College, and Professional) and by game category (Hack this game, Analog game, Paper Prototype, Basic digital game advanced digital game). Selected finalists will be offered the opportunity to be highlighted on this website, in blog posts, and at special events, including a showcase slated for later this year. Your site coordinator will have the link to the Google form for submission of team names, contact, game prototype description and the link to your 2-minute video. The deadline for submitting your 2-minute video and game description will be May 7th, 2017, one week following the end of the Arctic Climate Game Jam

An existing game is modified so that it addresses Arctic climate topics in some way. The existing game may be modified in such a way that it does not resemble the original.

Paper representation of what could become a digital game in the future. Paper representation of digital mechanics illustrate what gameplay in the digital version would look like but do not require actual programming to take place. Should include a description of how the game will translate to a digital medium and showcase elements of gameplay with simple paper materials. Paper prototypes do not need to look like a final version of the game but should illustrate gameplay mechanics.  Game must be designed from scratch during the game jam.

Game must involve only non-digital components. Typical examples can include board games card games, or role-playing games. Game must be designed from scratch during the game jam but in a playable form at the end of the event. This category is useful for either short or long events and also works for locations with limited technology.

These tools result in generally simple platform-style games and require a narrative be included. Games must be designed from scratch using simple tools or remixed from an existing game in the community (e.g., Scratch, Gamestar Mechanic, Pixel Press’ Floors and Bloxels, Roblox, GameSalad). If remixing a game, the remix must involve some significant departure from the original game, either in mechanics or narrative. Minecraft can be used if there is a clear designed game experience within a Minecraft World and there is a clear goal for a player to achieve within the Minecraft world with clear constraints. Can also use interactive fiction tools to create a text adventure using an Arctic theme. (Twine, InkleWriter, Episodes).

Designed from scratch in any platform of choice, excluding those platforms listed in the basic digital game category. This typically involves tools that offer more flexibility, but also more coding expertise, than the tools listed in the basic digital game category. Example platforms include Unity, Java, and GameMaker. Games should be at minimum complete to a rough but playable prototype form. This category is most amenable for longform events. 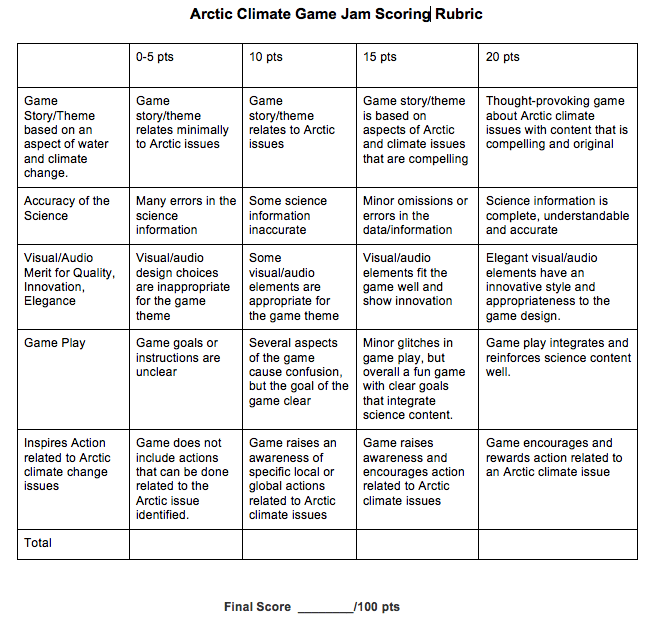